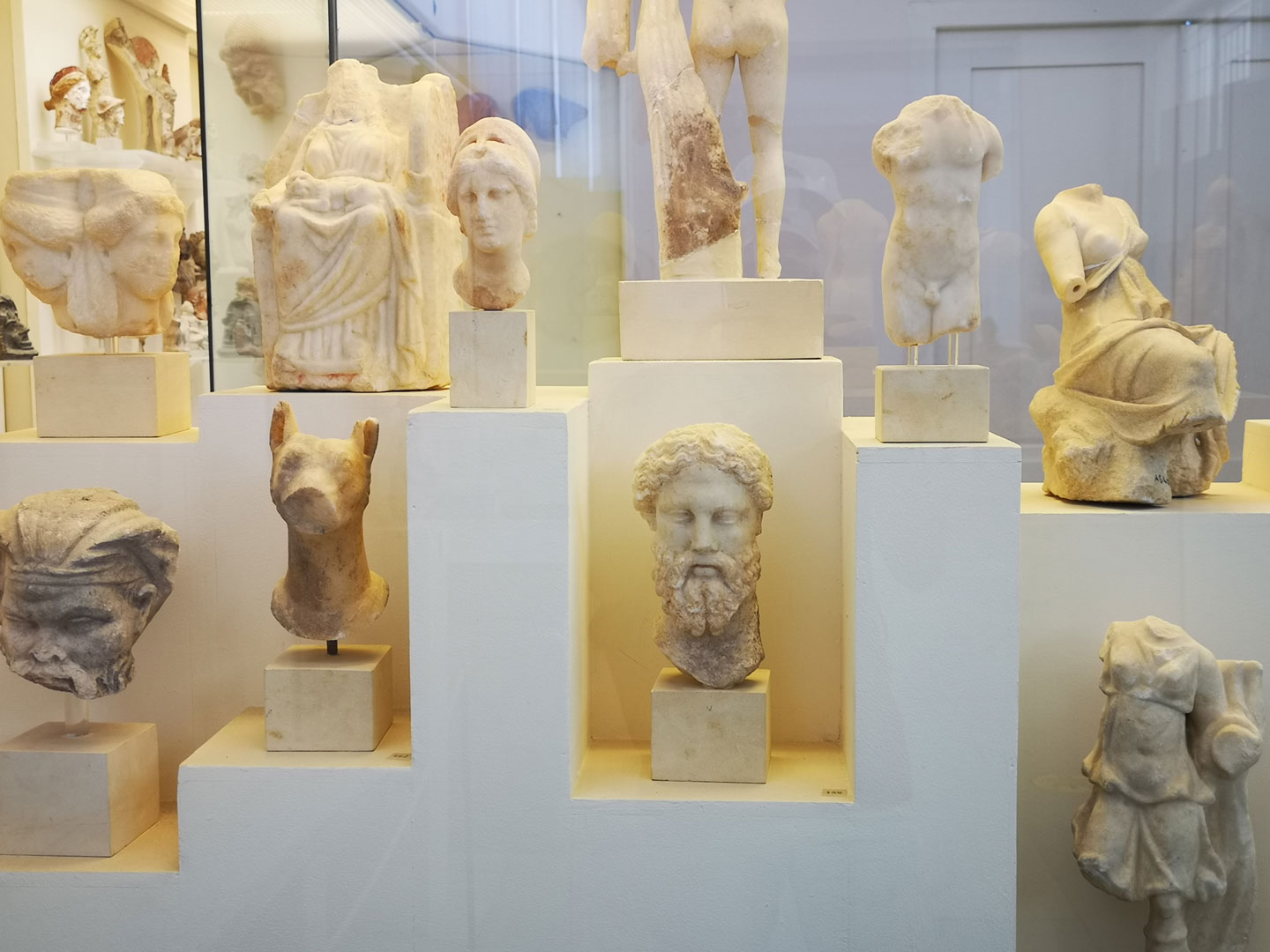 Whether you are a history buff or not, a trip to the Queen of the Cyclades cannot be complete without a visit to one (or all) of the, admittedly, exciting Mykonos museums! Even if you are here just for the fun and party aspect of the legendary Mykonos lifestyle, knowing a few things about the island’s interesting past is, hands down, one of the most rewarding things to do in Mykonos. That way, you can start to decode the mystery related to the island’s deep-seated infatuation.

In this guide, you'll find the most notable Mykonos museums showcasing everything from ancient tools used by Mykonians to agricultural implements that have changed very little in 2,000 years! Fascinating, isn’t it?

Built in around 1901, it sits in the Kamnaki region, right above the old harbour. It has been constructed with funds from both the Athens Archaeological Society and the Greek Ministry of National Education and Religious Affairs and displays 5th century BC findings unearthed from burial vaults across the island, including the neighbouring Rhenia Island, in the late 1800s.

The beautiful Neo-classical building that houses the museum experienced a facelift in 1934 to fit with the Cycladic architecture lines shown throughout the island, and even had an extra hall added in 1972. Inside this cultural and historic treasure, you will see an impressive collection of prehistoric to late-Hellenistic era vases (dating from as early as 3000 BC), funerary urns, and Hellenistic period sculptures, as well as 2nd-century columns, figurines, and jewellery. Also, memorial statues, 1st-century tombstones, 6th-century vessels with charming geometrical patterns, the impressive Pithos (a 7th-century jar with elaborate decorations and images showing scenes from the Trojan War), and other items.

Also referred to as the Folklore Collection of Mykonos, it is actually a complex of three different museums, namely the Kastro House, Lena’s House, and the Boni’s Mills (aka Agricultural Museum), each located in different areas of the island.

The centrepiece of the folklore Mykonos Museums is Boni’s Mill. However, Kastro House is the biggest of all three collections. Tucked in the Kastro region (just a bit north of Chora), the local house that now serves as the Folklore Museum was once the house of the founder’s grandfather, captain (some accounts claim he was a ship owner) Nicholaos Malouhos!

Inside it, you have the chance to see how a typical upper-class, captain-house used to be and how much it differed from the rest of the residences of that time, considering that sea captains and merchants were the wealthiest residents on the island.

Expect to be greeted with a total of seven rooms, each giving another type of collection. For example, the first room is where you will find oil painting, household appliances, Venetian cabinets, Cycladic chairs, tableware, lithographs, weapons, and similar items. The second room displays 19th-century engravings, portraits, paintings, popular musical instruments, school manuals, and various items. In rooms 3 through 6, you will see a typical 19th-century bedroom with a walnut wood dresser and metal bed, along with a library hosting 16th-century books, a fully-equipped kitchen, replicas of traditional local food for Easter and Christmas, and tools the ladies of the island used to use for their toilette.

Sea lovers, though, will probably find the 7th room absolutely mind-blowing, as it is filled with everything sea-related, from nautical tools and model boats to old maps and memorabilia of notable ships!

This is an adorable 19th-century, middle-class house nestled in the heart of the Chora in an area called Tria Pigadia (translated as Three Wells, after the three authentic wells adorning the exterior space). As you might have guessed it already, it got its name from its last resident, Lena Skrivanou, and actually provides a reconstruction of what life in the 19th-century looked like. This is achieved by highlighting items such as rich antique furniture, including large-frame prints, painted plates, old mirrors, wood carvings, and tapestries from various styles and periods, while also enabling visitors to see a typical internal arrangement of space.

Just a few steps from the glorious Panagia Paraportiani Church lies probably the most popular of all Mykonos attractions, Boni’s windmill (the locals call it O Milos tou Boni), which can be visited daily from June through September, from 16:00-20:30 (at the time of this writing – please check the updated opening hours with the museum). Overlooking the Chora, it is a 16th-century stone-built mill (of the oldest Mykonos windmills) named after George Bonis, its last owner.

Bonis Mill joined the rest of the Agricultural Museum’s collection in 1962 and allows visitors to see the full bread-production process through the mill’s complete mechanism and the equipment and tools on display at Bonis Mill.

Apart from the windmill, though, the Agricultural Museum also exhibits facilities and rural installations such as a wine-press, oven, well, dovecote, threshing floor, and other tools and machines from the pre-industrial era (and up to the early industrial times).

You will find it situated within walking distance from Lena’s House, waiting to excite the culture and history enthusiast inside you with incredible collections of the island’s maritime past. As you wander around the place, you will come across from Prehistoric scale models of Aegean Sea-traversing, steam-powered ships and rowing boats, to engravings, maps, and reproductions of ancient sea-theme-carved gravestones. Plus, the late-1800s mechanism of the Armenistis Lighthouse! All that aside, though, the most thrilling thing you can do while exploring the site is to board the traditional museum-owned sailing vessel called Evangelistria, which moores in the old harbour every summer!

The Archaeological Museum of Delos

Although not one of the Mykonos Museums per se as it is located on Delos Island, it is considered an integral part of the local history and culture, given the close connection between the two sister islands. Built in 1904, it spreads over several rooms, displaying historical artefacts, including historical statues excavated from the Delos archaeological site, as well as prehistoric pottery collections and everyday Mykonos art objects.

One of its most stunning exhibits is the Ivory Plaque that portrays a soldier wearing protective wild boar tooth-made headgear, a defensive shield and a spear. The unique monument dates back to around 1300 BC and was unearthed along with other bronze, ivory, and gold artefacts.

Other impressive attractions are:

Once you dive into the island’s earlier days and eras, you will emerge with a deeper understanding of Mykonos’ core. A core that is forged with steel and a soft heart. And, if you would like us to help you personalise your overall experience on the Island of the Winds, simply let us know! The Kivotos Hotels receptionists will be more than delighted to help make this trip one of your dreamiest ventures!