Why should you explore all Mykonos Windmills? | Kivotos Hotels 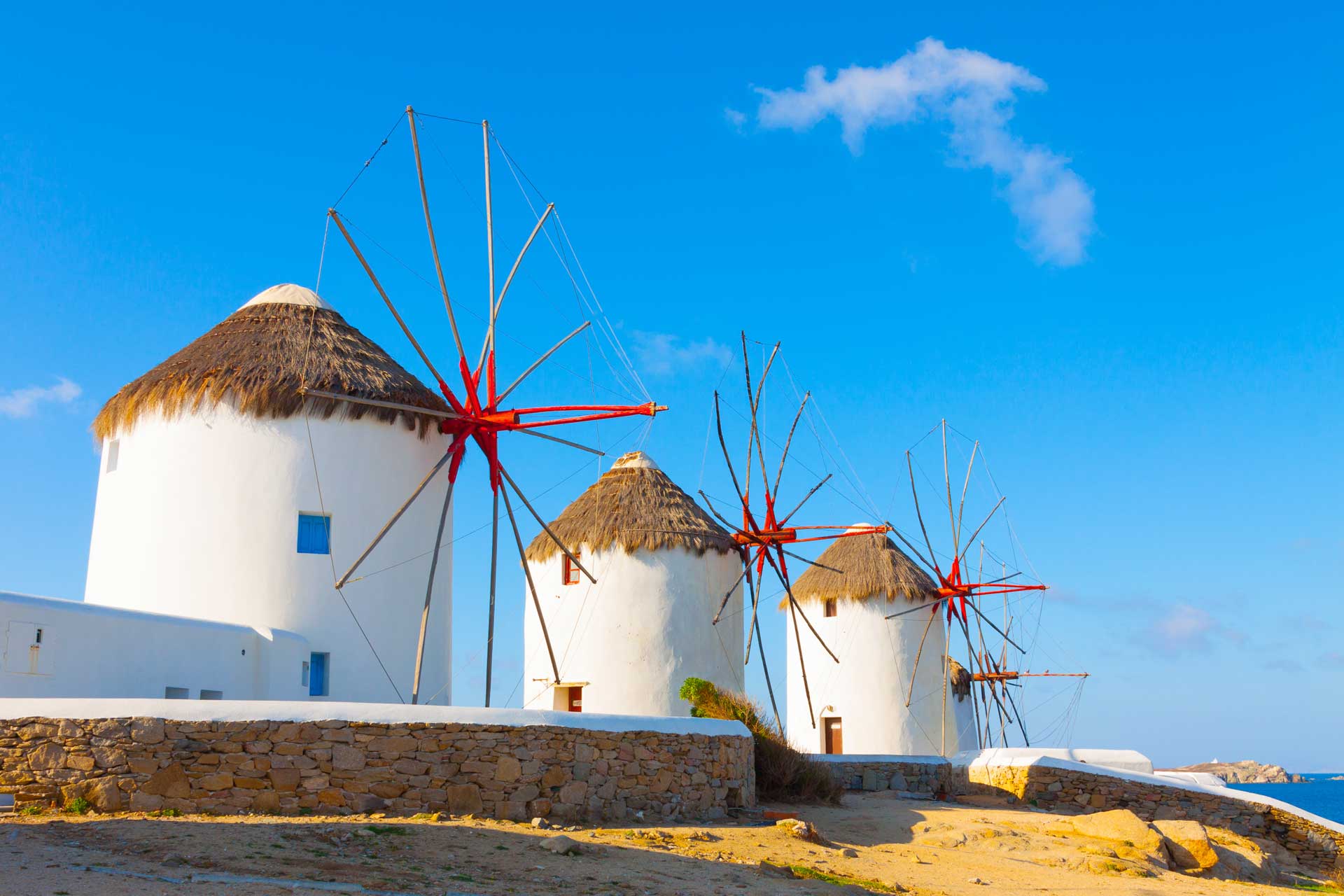 Whether you are visiting Mykonos for its animated night scene, the pristine shores, the cosmopolitan lifestyle, the world-renowned parties, or the delicious Mediterranean cuisine, you can’t claim that you truly know about the Queen of the Cyclades without having first dived into its history.

One of the most significant components that make up the infamous Greek island’ past, adding a milestone and an appeal factor to its current allure and popularity is the historic Mykonos windmills. Shaping the local economy for centuries and contributing to a much-needed financial uplift of the locals (who were living in a rather barren land, lacking the lush green terrain of other Cycladic destinations), the Mykonos windmills are rightfully considered iconic landmarks that have established their value over time.

Below are some exciting facts about these stand-still giants that gaze the vastness of the Aegean Sea, waiting to share stories of their glorious past.

You probably didn’t know that...

The Incredible Mechanics and Operation of the Mills

The Cyclades mills are constructed in a tubular, circular shape featuring thatched roofs made of the finest wood variety that housed the wheel mechanism, as well as stone-made walls with wood injections. Usually three-storey, the imposing buildings adorning the island’s landscape have been built to withstand the force of the wind, as well as the heat, the salt, and the moisture from the sea.

As for their chalky-white paint, it has been specifically used so the mills can be in harmony with the rest of the local architecture, while making a sharp (and utterly heart-stopping) contrast with the azure of the Aegean Sea and the Mediterranean sky!

But, that’s not all. The wooden, round-shaped moving contraption on the exterior of the mill consisted of 12 wooden antennas, each bearing a ship sails-like fabric (heavy cotton) in triangular shape that helped capture the wind’s angle the best possible way (they could be manipulated to accomplish that) and carry the movement to the interior, central wooden axis, located on the top floor, which turned at the highest possible speed. That axis was responsible for giving force to the grinding stones, enabling them to rotate and grind grains. When the grains were ground, they would be collected on the second floor, while the flour and cereal grain were weighted and stored on the ground floor.

Finally, the mills’ precise location was not left to chance either. In fact, you will bump into them in the windiest areas of the island. That way, they could utilise wind power the best possible way. At the same time, though, they were positioned in places that were easily accessible by the carts and beasts of burden which helped the islanders carry their grains.

Mykonos Sightseeing to the Mills

Two areas on the island had (and still have) the largest number of mills – Pano Mili (meaning “the mills high up”) and Kato Mili (meaning “the mills down below”), with the first providing the island with flour and rusks and the second serving as supply stops for ships and other islands with the same products. Today, many of them are enjoyed as bars and are considered an exquisite Mykonos attraction for the panoramic vistas of the island, the spectacular Mykonos sunset views, and the fantastic seascapes they offer from atop the hill across Little Venice and other prestigious regions.

Of all still standing mills, two are open to the public for visits (even partially), namely Boni’s Mill and Geronymos Mill.

Once you step into the mill, you will see everything exactly as it was in the 16th century, when Boni’s mill was operating (it is the result of a renovation that took place to give the mill its original state and condition). Being part of an iconic Mykonos museum, the Mykonos Agricultural Museum, its doors are always open to the public. Have a look around to see the details of the flour-making process from centuries ago, including the stages of storing and processing grain and flour. In the exterior space enveloping the mill, you will find a well windlass, a grape treadle, a dovecote, a threshing hold, and other areas of traditional agricultural ventures.

But, apart from being one of the oldest museums in Greece (of its kind), Boni’s mill is also a popular meeting point every second Sunday of September, when is the annual Harvest Festival that excites participants with free snacks and drinks and lots of traditional dancing, folk tale tellers, and folk music!

Dating back to the 18th century, it is one of the last surviving Mykonos windmills and one of the oldest on the island that kept its operations until the 1960s. At the moment of this writing, it is privately owned and has been fully renovated very meticulously so that it does not lose its original mechanism and other equipment. This endeavour has been crowned with partial success, as some components of its original grinding equipment have been lost over time. If you want to visit Geronymos Mill, you can only explore its outdoor spaces (the interior is not open to visitors) and soak up stunning views of the shimmering Aegean Sea spreading below your feet, as well as scenic Little Venice region.

Tip: We strongly suggest visiting the nearby building (originally, the storage area of the mill) that has been turned into a souvenir and jewellery shop for unique gifts and mementos of the overall experience!

There are several ways to reach the quintessential landmarks, the majority of which is located in the Chora, a few short minutes from the central bus station of Fabrika. You can make your visit part of a private tour around the island’s main attractions or use private transfer services and get there by private VIP car, minibus, or taxi.

Of course, car rentals and public transfer options are also nice options, although more time consuming and slightly more inconvenient compared to rental cars or private transfer, as you will need to drive on narrow, dirt roads (for the most part) or wait in queues for the bus. However, if you would like to experience living like a local and choose to get around via bus services, kindly inform the bus driver of the intended destination (the mills) as the bus might not stop at the scheduled stops.

And, if you need any assistance with planning a visit to the alluring mills, we are only a phone call away!