Why should you visit the Armenistis Lighthouse 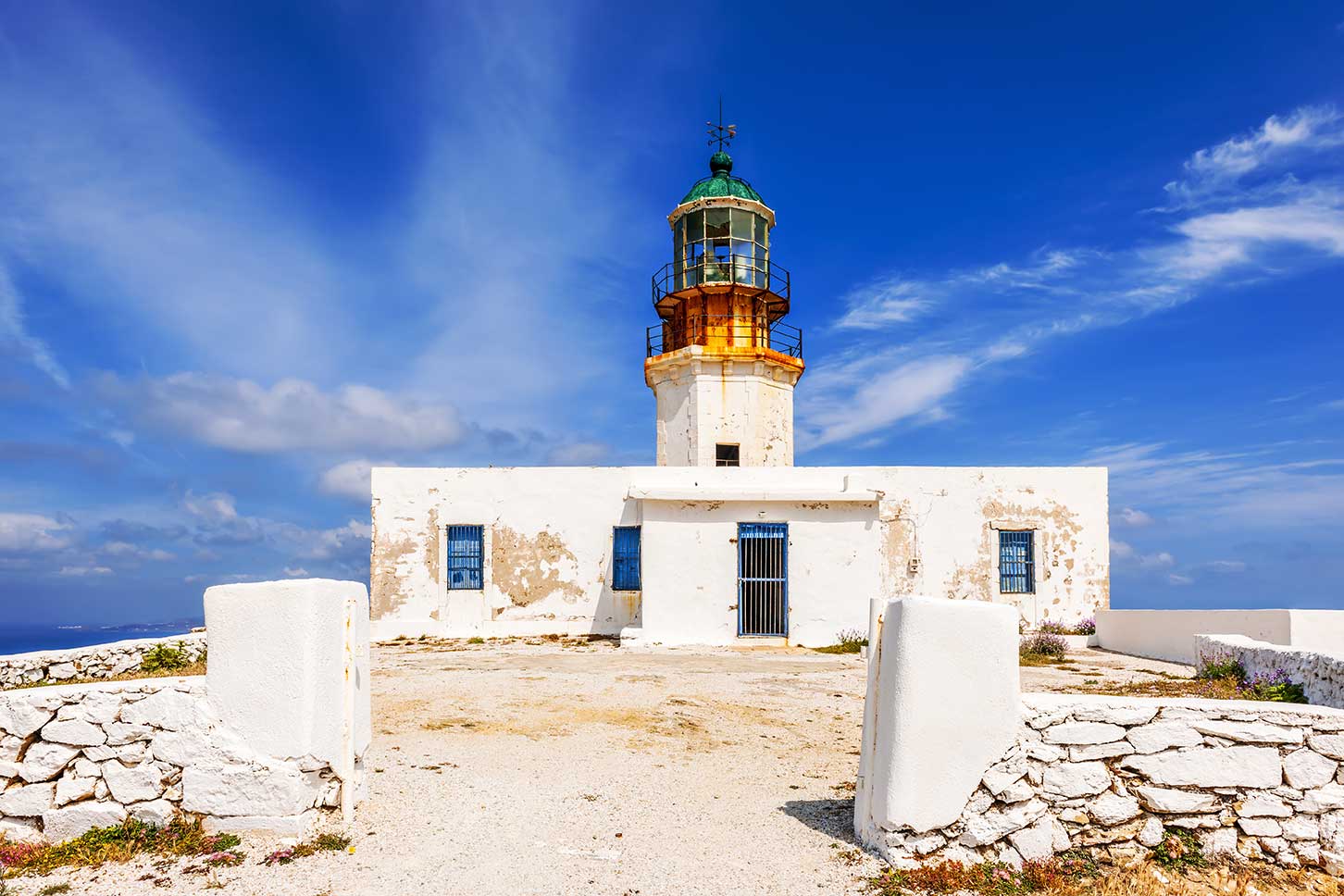 One of the most stunning sights in Mykonos is the imposing Armenistis Lighthouse, standing proudly atop the hill at Fanari area on the north-west of the island. Majestic as it can be, Armenistis Lighthouse seems to bring together two equally exciting worlds. Indeed, it feels that under its octagonal stone tower, the cosmopolitan, lively Mykonos with the vibrant night scene and unprecedented levels of luxury and the stunning Greek island with the charming traditional Cycladic architecture and natural beauties meet. In perfect harmony with its natural surroundings, Armenistis Mykonos, you may hear the old lighthouse whispering stories of the past every day just before the sun slides behind the horizon. Wondering what kind of narrative this is? Here is a small taste.

The heart-breaking story of the old lighthouse

Armenistis Lighthouse might be one of the most popular Mykonos attractions for its heart-stopping views of the Mykonos coastline, but there’s more than that to it. Indeed, the island did not have a lighthouse before the late 1800s. However, a sad moment in time that caused the lives of 11 sailors and crew members of an English steamship that crashed just outside the island’s shores has forced preventive measures to be taken. That’s about how the glorious Armenistis Lighthouse was born.

To this day, Armenistis Mykonos sheds its powerful beam with the nearly 185-metre focal height to passing ships, helping them navigate through the Aegean Sea. You can find Armenistis Lighthouse at the highest point on the island flashing its light every 10 seconds. Its privileged location is another feature that makes thousands of visitors include the old lighthouse in their itineraries and Mykonos tours. Rightfully so. Once up there, expect to be pampered with sights that please the soul and make a Mykonos trip worthwhile for yet another reason, including a captivating sunset in Mykonos.

Preparing yourself for the Armenistis Lighthouse effect

Monitoring the straits between Tinos island and Mykonos island like a sleepless guard, Armenistis Lighthouse is a superb spot for photography lovers. If you feel enthusiastic about capturing unique panoramas and seascapes, then the hill at Armenistis Bay will hit all of your requirements. The same allure is what awaits romance seekers and the romantic souls visiting Mykonos. Sitting in the middle of a land distinguished by raw natural beauty, overlooking the magnetising landscape brings you in alignment with your inner self and allows you to share memorable moments with your partner. And, as you are open to all this incredible magnetism, you’ll surely feel the profound energy related to the neighbouring Delos island that wraps around Mykonos as well. Should you let it overwhelm your molecules, it can be truly rejuvenating.

However, experiencing a mind-blowing sunset in Mykonos from Armenistis Lighthouse, getting ravishing vistas of the Mykonos coastline and the vastness of the Mediterranean Sea, being overwhelmed by the intense battery-recharging sensation, and embracing the glory of the cloudless sky enveloping your entire existence, are just some of the features that make Armenistis Mykonos the most must-visit of all Mykonos attractions.

You see, Armenistis Lighthouse is a charming sight on its own. Following the lines of Cycladic architecture, it blends the unique cubic-shaped construction seen across all Mykonos buildings with Old-World charm and appeal. Whitewashed, with adorable blue doors and windows* and an octagonal tower, Armenistis Mykonos definitely stands out from afar, one way or another.

Nevertheless, let’s not forget that this old lighthouse is close to nearly all popular Mykonos attractions, including the Windmills, Little Venice, the Mykonos maritime museum, and many more. Plus, you are within an arm’s reach from the biggest sugary shores and the most famous beach clubs whose parties have taken their place at the pantheon of the most legendary celebrations of the widely-known Mykonos lifestyle. And, it’s just a short drive away from your Ornos accommodation and Kivotos Mykonos Hotels.

* Back in the day, each family would paint their house door and shutters to the colours that represented their profession. According to the colour code followed back then, blue was for sailors and anyone related to the sea. Likewise, green doors and windows showed that the family living in it was dealing with the land somehow. For public buildings, blue against milky-white exteriors was the traditional (and now, by law, enforced) colour scheme.

Very few people know precisely the extent of the Armenistis Lighthouse grandeur. Here are some details that will reveal significant aspects of this popular landmark and its crucial role in the island’s maritime history.

How to best experience and see the Armenistis Lighthouse

One of the best ways to explore not only the old lighthouse but also the surrounding area is through a Mykonos tour. Even better, a helicopter ride will give you the most panoramic views of the captivating sight. Of course, you could always include it in a walking tour that will introduce you to other nearby Mykonos attractions and sandy beaches.

After all is said and done during this fantastic day, heading back to the pampering of your luxury suite and relaxing with a refreshing spa treatment or massage is a fabulous way to end this experience. Or you may simply sit back and enjoy a glass of the finest champagne or local wine, watching a heart-stopping sunset in Mykonos from your private balcony or veranda! In any case, one word can describe the overall sensation and adventure you have just had – magical.