Is Delos Worth Visiting?

Once the place that almost 30,000 people called home, Delos is a Mykonos’ sibling without equal for many reasons. Also referred to as the island of light, it is the birthplace of ancient Greek gods Apollo and Artemis (the offspring of Leto and Zeus), and a powerful spiritual and cultural center.

Formerly a place of utmost commercial importance, Delos, Mykonos amazes with its fascinating past that counts many millennia and its might considering that it served as the Inviolable Sanctuary and the Seat of the Athenian League some 4,000 years ago!

Today, Delos is uninhabited and declared a UNESCO World Heritage Site that welcomes visitors thirsty for history- and mythology-rich lands and soils that were once deemed so sacred that nobody was allowed to die or give birth there.

In fact, after being reckoned the spiritual heart and a major reference point in the world, all the dead were taken to nearby Rhenia island, to purify Delos! This awe-inspiring dot on the map is just a few miles off the west Mykonos coast and is definitely worth every second of your visit there.

What to expect from touring Delos island

Today, the entire island is an extensive archeological site full of relics, Hellenistic era ruins, and artifacts narrating stories of a glorious past and an impressive ancient world.

You can reach the breathtaking island within half an hour from Kivotos Mykonos Hotels, either through the regular Mykonos to Delos ferry services, a boat tour, or your personal yacht and then have a guided Delos tour to let you in on all the fascinating bits and pieces of the exciting Delos puzzle.

Even if you are not a history lover fantasizing about such places, Delos can certainly please you with its raw natural beauty, the pristine sights, the fantastic seascapes, the sugary shores, the crystalline waters, and the idyllic views from atop Mount Kythnos!

That being said, Delos is a non-touristy island, which means that there are very few tourist facilities, so please come prepared by wearing a pair of walking-suitable shoes and bringing a sunblock cream and a hat. For light snacks and water, you can head to the small cafe right next to the Archeological Museum of Delos and its amazing collections of pottery, figurines, and 7th-century sculptures. Nevertheless, kindly note that the cafe is usually open during the high season. So, if you visit Delos any other time, you may need to pack some snacks and a few bottles of water before you get here.

As for the Delos ruins, these are remarkably preserved almost in their entirety, while some of them are regarded as the most significant ruins in the Mediterranean (especially the delos mykonos citadel). 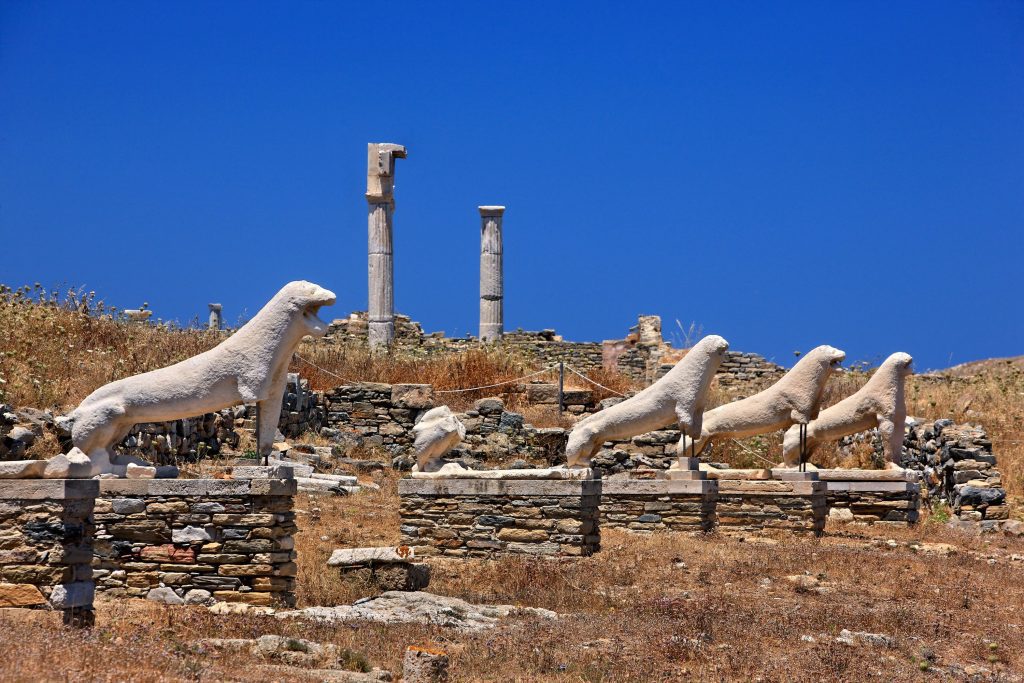 The most jaw-dropping Delos landmarks

Hosting communities that once built things like sublime temples, luxury mansions featuring intricate mosaics with geometric designs and indoor bathrooms, and running water systems throughout the cities thousands of years ago, Delos was home to a superbly advanced civilization that still manages to cause feelings of admiration even through its ruins. Some of the must-see landmarks when you visit Delos island are:

Of course, it’s impossible to list all of the wonderful sites worth your time at Delos, Mykonos. There are so many more, such as the (1) Temple of the Delians, with the colossal Apollo Kouros statue (a foot of which is now at the British Museum), (2) Temple of Isis with the superb views, (3) 500 BC Temple of Hera, (4) Oldest synagogue in the world (aka Delos synagogue), and the (5) 300 BC Dionysus-dedicated Stoivadeion with the huge god Dionysus symbol (a phallus) as one of the supporting pillars!

What to do in Delos besides exploring the archeological sites

Besides the absorbing cultural experiences you can have when you visit Delos and the Archeological Museum of Delos, the island is also one of the most beautiful Greeks islands in the Cyclades complex. This means that a Mykonos to Delos trip can reward you with activities like hiking Mount Kythnos. The path and stone steps will guide you at nearly 115 meters above sea level, where you can soak up the panoramic vistas over the surrounding countryside, the ruins, and, of course, the glistering Aegean Sea (even Tinos and Syros islands on a sunny day).

Delos can also be part of a sailing adventure or a yacht cruise as you go around the rest of the Cyclades islands. Needless to say, the sandy shore of Fourni and its crystal clear waters and coves offer a unique opportunity for you to spend some relaxing and rejuvenating hours by the beach. While here, don’t be surprised if you feel as if time has frozen. Delos can have that kind of effect on its guests!

In addition to all these, the island is said to have profound energy, which makes it ideal for practicing yoga, meditation, and many more spiritual and physical practices. However, please be warned that overnight stays are not allowed. 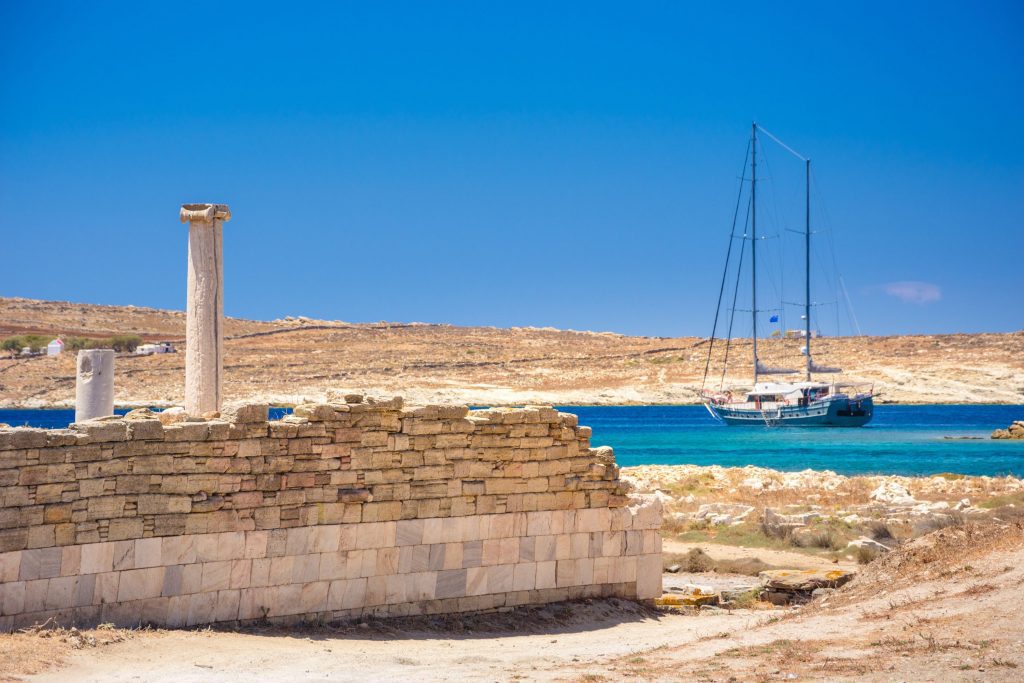 No matter how you look at it, visiting Delos is a once-in-a-lifetime experience worth going after. It’s not often that one gets to stroll down the streets where ancient Romans and Greeks used to walk and have an entire island turned into a vast museum from end to end. Long gone, the civilization that once thrived here is surely not forgotten. The cherry on top of the cake? That this magnetic and totally hypnotizing place is no more than 30 minutes from your luxury Kivotos suite!