Santorini Windmills – Which should you visit 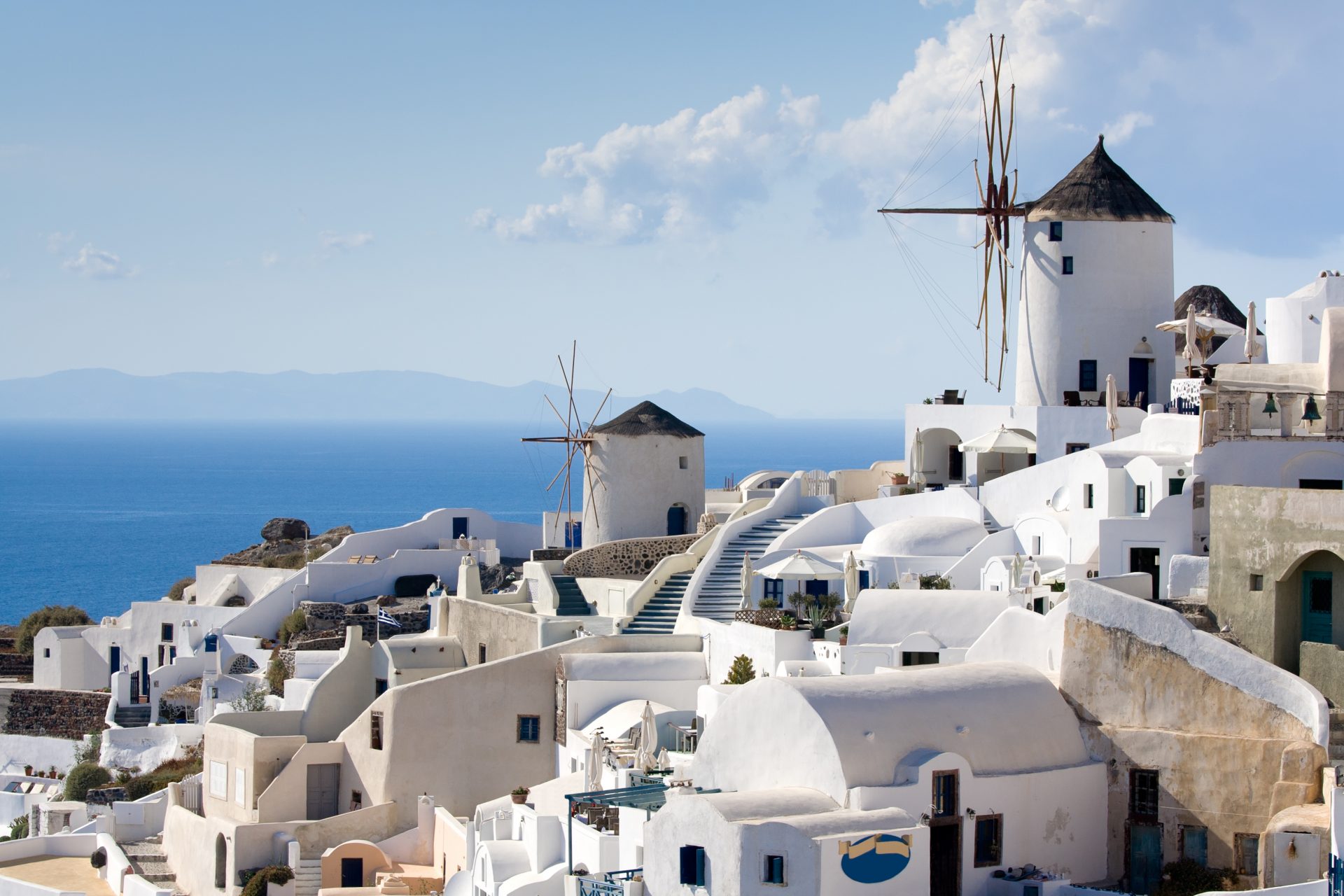 The Cyclades is a charming complex of Greek islands in the Mediterranean Sea that stand out with their unique architecture and natural beauties. One of the most illustrative ones is, of course, picture-perfect Santorini, which enchants with its cubic-shaped, chalky houses, the hundreds of chapels with the adorable blue domes overlooking the Aegean Sea, the most romantic sunsets, and the infamous volcano.

However, what is also common among the Cyclades islands is the Meltemi wind (strong northern wind) which blows almost year-round. Once a natural element that kept the island’s economy moving, it provided power to the many Santorini windmills to help grind local produce and make flour for in-land use and trade. Today, the Santorini windmills stand like sleeping giants – reminders of a significant past and waiting to tell their exciting stories. Below are some fascinating facts about this popular Santorini tourist attraction that rightfully belongs in every single Santorini sightseeing tour.

A struggle for survival

As you have probably known already, Santorini witnessed its complete destruction in the 1600s, when the most catastrophic volcanic eruption in the past 10,000 years occurred. As a result, nearly everything on, around, and about the island was wiped off the face of the earth, leaving behind nothing but barren land and rocks. Within a short while, though, we see islanders trying to recreate a life on Santorini out of what was left for them. And, the lack of other resources and the very limited agriculture options they had with the volcanic Santorini soils made them turn to their natural assets – namely wind power.

This is how the Santorini windmills came into being around the 17th century (some studies suggest they existed as early as in the 14th century) located at key locations across the island to produce goods regardless of the weather conditions. At that time, grinding barley and wheat using the Santorini windmills was a heavy industry that kept fueling the local economy for more than four centuries until the subsequent massive earthquake of 1956 seized their operation.

The owners of the Santorini windmills

The Santorini windmills were tied to the wealthiest of the island. This means that they belonged to parish churches or the noble of this land, who rented them out to experienced, local millers. Back in the day, a miller was much more than a person who knew how to grind wheat or other produce. They were individuals with a plethora of capacities, as they knew a lot about meteorology. This enabled them to predict weather changes and act accordingly. Most millers also had bakery skills, which makes sense considering that the Santorini windmills also operated as bakeries. Finally, millers were said to be able to do heavy manual work and know from tying sails and ropes to sailor’s knots. Impressive, indeed!

The Santorini windmills are included in every list with the best things to do in Santorini, while many people choose to visit them for the stunning Santorini sunset views, they get from them. Now, if you opt for a Santorini sightseeing exploration of them, you will definitely be taken to Emporio – the place with the largest number of iconic Santorini windmills.

Emporio is a scenic village a bit further from the island capital, Fira, Santorini, and its sophisticated glamour. Once the commercial centre of the island, it sits on the southern part of Santorini at the foot of Mt. Prophitis Elias and is the largest Santorini settlement. That aside, many Santorini windmills are also seen in Fira, Santorini gazing at the shimmering Mediterranean Sea and providing heart-stopping Santorini sunset experiences.

Although very few of the 70 historic windmills remain intact today, there is still a lot to admire. Let’s also note that some of them are turned into holiday lets and housing while others are trying to conserve what is left of their original glory.

Visiting the Santorini windmills – What to expect

As already mentioned, the most picturesque Santorini windmills are found in Fira, Santorini, and Emporio village. The same applies to other locations on the island, such as Oia, and the eight windmills lying in the archaeological site at Gavrillos hill on the southern tip of Santorini. Now, when it comes to the overall adventure you are about to embark on, be prepared for a fantastic walk heading to the popular Santorini tourist attraction with the mind-blowing panoramas. Besides the glistering, azure waters of the Aegean Sea, you will also have the chance to admire awe-inspiring architecture, including the signature Santorini cave houses.

Naturally, you could combine a visit to the Santorini windmills with an exploration of other major landmarks and popular activities, such as a Santorini sightseeing and wine-tasting tour. It is incredible how Santorini managed to survive its destructive past. In fact, the very volcanic soils that remind of the island’s bleak days now give life to unique grape varieties which make the finest and most acclaimed wines! No wonder Santorini is a top holiday destination year-round.

Santorini has managed not only to maintain life but also offer luxury and pampering to everybody living or visiting the island. Yet, at the same time, it maintains a humble face, welcoming guests to unprecedented levels of exclusivity and privacy and a soul-pleasing journey bearing the elements that complete a once-in-a-lifetime experience.