Santorini Villages that you should visit before you leave! 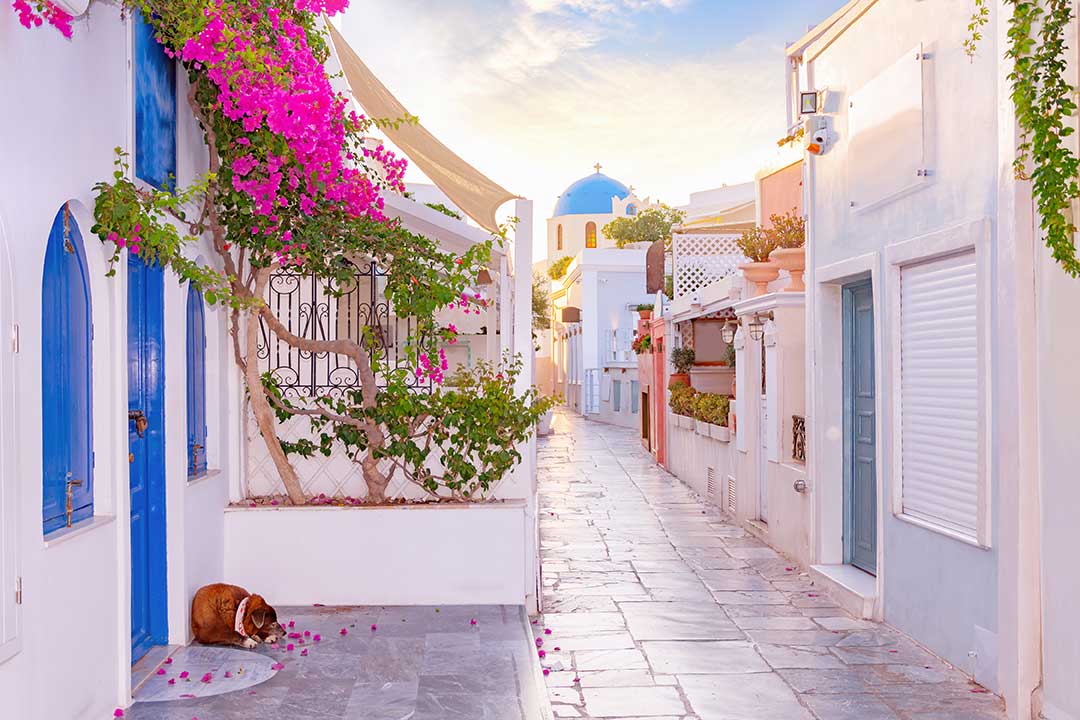 Everybody knows the so-called Queen of the Cyclades for its world-class accommodation, pristine black sanded shores, idyllic sunset views, elite facilities, extraordinary volcanic scenery, and adorable Cycladic architecture. All these are, of course, highlighted in the most colourful way through the island’s grand settlements and delightful fishing communities that have managed to keep their uniqueness and authenticity over the years, providing visitors with suis generis experiences that take them back in time as they discover the outstanding aftermath of the ancient civilisations that once occupied the island. Below is a small, illustrative list with the parishes you should definitely visit during your Greek island vacations.

Glitzy and radiant, Fira is the shining star of the family, welcoming visitors with heart-stopping views of the volcano (the infamous Caldera) and the two volcanic islands of Palea Kameni and Nea Kameni that dot the scenery, as well as a high-end shopping scene, opportunities to join a lively nightlife and enjoy a vibrant social life, and treat your eyes with unparalleled natural beauty.

Sitting on the western edge of the island, it is the place where all action takes place. Feel free to stroll along its picturesque alleys during the day and soak up the peacefulness and tranquillity of the experience, or come after dark and be part of the after-sunset fun. In the second case, expect a plethora of bars, cafes, restaurants, and clubs spoiling you for choice, alongside numerous facilities to ensure you have everything you will need for a memorable stay, including souvenir shops, stores selling handmade crafts, and traditional produce.

As for the local landmarks, some of the most iconic historic and cultural Santorini attractions are right here, such as the Megaro Gyzi Cultural Centre that also hosts theatrical performances and concerts, the Archaeological Museum of Thera, the Cathedral, the imposing Skaros Rock fortress, the Museum of Prehistoric Thera, exhibiting historic items and relics, and the Brewing Company that produces the delicious Donkey Beer, which you can explore before or after a fantastic cable car ride to of from the port!

Pyrgos is one of the most quaint Santorini villages tucked atop a hill, overlooking the vastness of the Aegean Sea and the glory of the Mediterranean sky. Enchanting with its Cycladic architecture and whitewashed houses, it greets visitors with maze-like cobblestone streets that provide an experience that almost feels out of this world.

Declared a listed monument in 1995, the settlement has gone above and beyond to preserve its traditional character. Today, it offers endeavours untouched by time, and invites visitors to get lost in its labyrinth-like streets only to reinvent themselves and emerge a new, more relaxed and content person!

Now, if you love hiking and trekking, we strongly suggest walking to the highest point of Pyrgos. The incredible panoramas you get from up there will definitely reward you for your efforts! While here, you may also visit the Kasteli Castle, one of the five (and best-preserved) Venetian castles on the island that is adorned with three adorable chalky-white churches, the 1700s Profitis Ilias Monastery, where you can see 17th-century religious icons, relics, antiques, and ecclesiastical items (open to the public from April through October), and Santos Winery, one of the most prestigious wineries on the island, producing award-winning wines.

Emporio is probably the largest of all Santorini villages that is found on the way toward Perissa beach, a beloved volcanic sand beach on the island. You can leave your car at the main square and then wander through the old part of Emporio the small paths of which sit just a few stairs further. One of the most soul-pleasing things to do in Santorini’s biggest settlement is exploring the mediaeval Emporio Castle, an architectural masterpiece, and Goulas Tower, the ancient fort around which Emporio has been erected.

Once inside the castle, you will instantly realise that it is actually an exciting tangle of small alleys, narrow, almost vertical staircases, arches, domes, overhead bridges, and miniature balconies, in various forms and shapes. Within the same grounds, you will also see the 16th-century church of Virgin Mary (Panagia church) and the glorious church of the Annunciation of Virgin Mary (Evangelismos Tis Theotokou Church) with a priceless wooden screen and a beautiful bell tower, while the charming church of Agia Kyriaki and its two scenic 15th-century chapels are just outside the settlement, some 50 metres from Goulas Tower, which was also said to not only provide protection from pirate invasions, but also store crops.

Firostefani – A continuation of Fira

Driving outside Fira to the north and heading to hilltop Imerovigli, one stumbles upon the allures of Firostefani, one of the quietest kids in the family with fabulous caldera views and an excellent range of accommodation options despite its rather small size.

Apart from the spellbinding Santorini sunset views, Firostefani is also visited for the Three Bells of Fira, perhaps one of the most photographed catholic churches on the island. Indeed, the blue-domed chapel with the three-bell belfry that overlooks the shimmering Aegean Sea is a famous Santorini sightseeing spot, although slightly in the shadow of the landmarks in Firostefani’s more glamorous siblings, Fira and Oia.

Oia – Falling in love with the Cyclades

Most people visit 15th-century Oia for its head-turning sunset views and the gorgeous architecture. One of the wealthiest Santorini villages, it used to house the homes of sea captains that would sail to Greece and Turkey to trade marble and other items. The fact that it is sitting on the lowest elevation (around 100 metres above sea level) compared to other of its Caldera counterparts (usually over 250 metres in altitude) has made Oia a popular place for captains returning home with goodies that could not be carried all the way up to the Caldera (such as marble stones), where all other settlements are located.

So, now you know why Oia’s paths are the only ones laid with marble! Plus, it offers wonderful views of Thirassia island and chances to visit signature landmarks, such as the Maritime Museum, as well as art galleries, windmills, the old Oia port (aka Ammoudi Bay, also home to the infamous Thermal Springs), and the ruins of a Venetian castle. As for the closest shores, these would probably be peaceful Armeni Beach and secluded Katharos Beach.

Imerovigli – Where the sun kisses the earth

The moment you step foot on hillside Imerovigli, you understand the reasoning behind its nickname “The balcony of the Aegean”. Standing peacefully in the heart of Oia and Fira, it is a striking settlement that witnessed the rage of Mother Nature in 1956, when a massive earthquake forced most of its residents to seek refuge either to Athens or outside the Caldera.

Home to some of the most exclusive and top-tier hotels on the island, including Kivotos Santorini, it will flood your heart with the most magical sunsets ever seen by human eyes, captivating panoramas of the volcano, and a unique sense of awe and tranquillity, especially when compared to its more bustling Oia and Fira cousins.

Part of the experiences you can also claim for yourself (besides witnessing the unique light show performed every afternoon as the sun slides behind the horizon painting the whitewashed rooftops with reds, oranges, and pinks) are fine dining and enjoying delicious drinks at the bars that line the caldera.

Want us to help you organise a tour to the most scenic places on the island? Please do not hesitate to communicate your needs and requirements with our front-desk staff, who will be more than happy to contribute to the creation of the most unforgettable, comfortable, convenient, and pampering experiences for you!