Everything you need to know about Santorini’s volcano 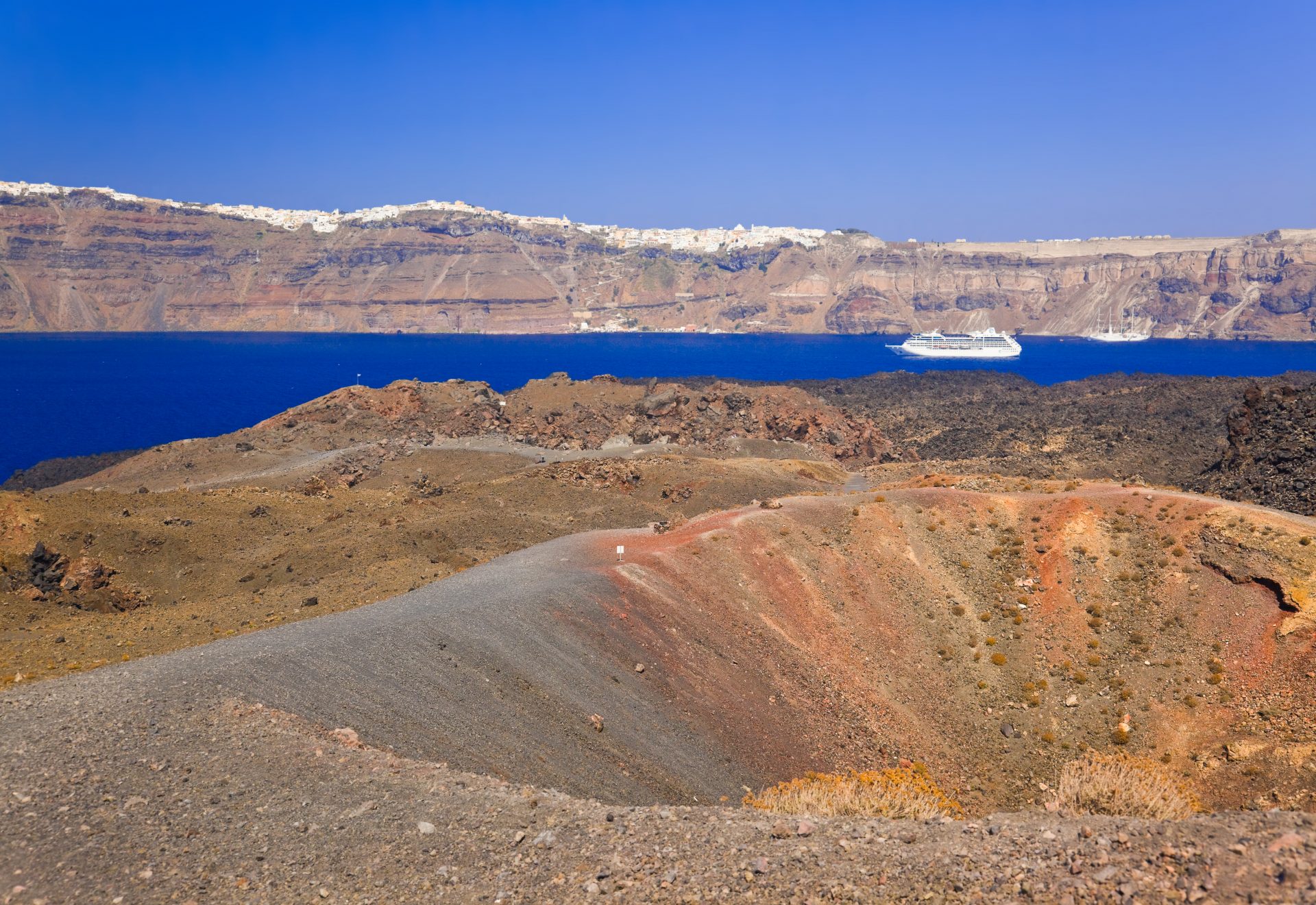 There is no doubt. Santorini’s volcano is a prime tourist attraction for everybody deciding to spend their holidays (or even a short getaway) on the magnificent Cyclades island. Indeed, the Santorini volcano has shaped the rich and turbulent Santorini history and past from the 1960s and onward, forcing the island to rebirth from its ashes – literally.

Here are some facts about this big player and how it has affected the way Santorini looks and feels today. As you are about to realize, the volcano much more than another Santorini tourist attraction to get a picture at. It is living proof of how willpower can help turn the hurdles of life (no matter how devastating) into something admirable.

From thriving to struggling to survive

Excavations in the ancient Akrotiri settlement (another popular Santorini tourist attraction near the Santorini volcano) have revealed that Santorini was once the land of a hugely advanced civilization. One could find from multi-storey buildings and underground heating to dual-pipe plumbing during a time when people in other parts of the world could not even imagine these were possible. It even had a  sophisticated civil protection mechanism to help protect residents from earthquakes!

However, the Santorini volcano eruption that took place 3 ½ millennia ago was so catastrophic that it devoured every single hint of life and civilization on the island. In fact, the blast of the Santorini volcano in the Minoan era is said to be the most destructive event on Earth in the last ten thousand years, totally wiping off everything within a 60-kilometre radius. What is more, scientists claim that the 10-metre-thick volcanic ash blanket, alongside sulfuric acid drops, has travelled all the way to Greenland’s glaciers, plunging the average temperature of Earth by a couple of degrees Celcius.

As expected, islanders were forced to flee the island with whatever means they had, leaving behind a lifeless land that was once home to rich vineyards and verdant countryside.

Rising from its ashes

Miraculously, Santorini managed to find its feet again, with the first inhabitants appearing after the 8th century BC, trying to make the island prosperous again. Was that all? Not even close. The Santorini volcano has erupted multiple times since then, with the last eruption taking place in 1950, spewing 1,000-metre-high fireballs and ejecting over 90 billion tons of molten rock within just six days. In fact, the explosion was so powerful that it created a massive tsunami which slammed the coasts of Crete. At the same time, it decimated the local fauna and flora with the acid rain that kept falling on Santorini for several years and created the Caldera - a famous Santorini tourist attraction included in every Santorini sightseeing tour and list of things to do in Santorini.

The creation of Thera, Thirasia & Aspronisi

What you see today has little to do with what Santorini was in the 1600s. According to volcano specialists, the Santorini volcano has erupted more than 12 times already in the last 40,000 years, pushing the island to be reborn while dramatically affecting the morphology of the archipelago.

Nearly three millennia ago, the island was twice its current size. Nevertheless, a large part of it sank, forming a caldera close to the current Santorini tourist attraction bearing the same name after a volcanic eruption at Cape Riva. A thousand years later, a newer eruption broke the island into three parts in 1613 – Thirasia, Thera (aka Fira), and Aspronisi. In the eight subsequent eruptions, Santorini became home to the islets of Palea Kameni and Nea Kameni as we know them now. 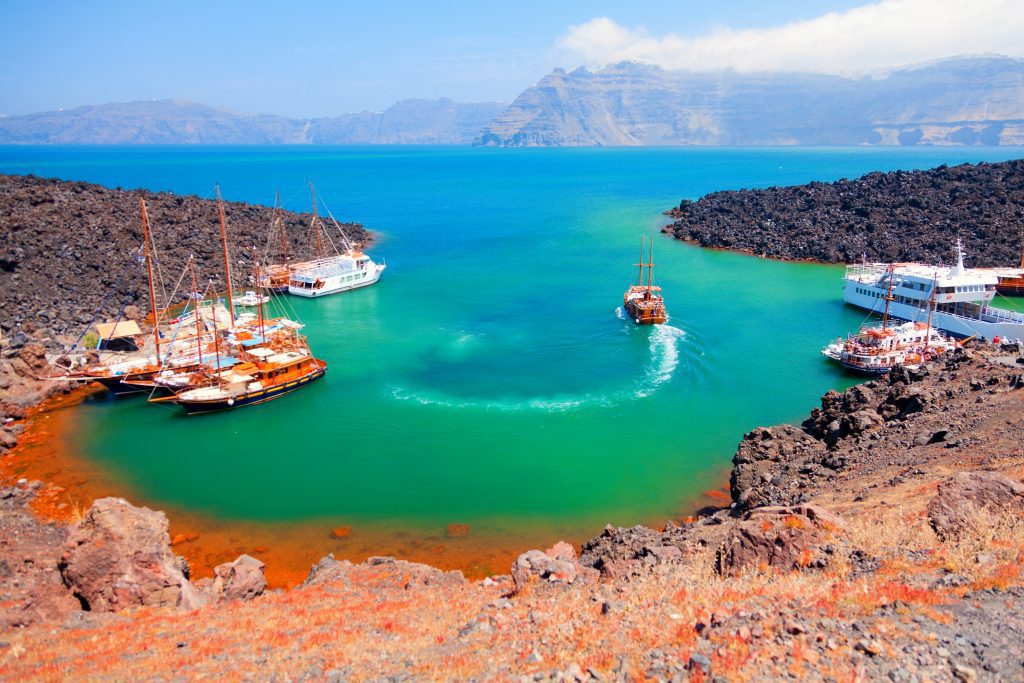 Also, the lava that has flowed into the Aegean Sea all these years has contributed to the formation of amazing underwater caves and volcanic cliffs not seen elsewhere. Luckily, the volcano has been sleeping since the 1950s, and volcanologists don’t expect anything similar to occur again until perhaps after around 11,000-15,000 years or so. In any case, they are closely monitoring things like temperature changes, seismic activity, and vapor content from the hot springs. This enables them to predict a potential future volcanic eruption up to 12 months beforehand.

How to enjoy your Santorini volcano visit the most

One of the best ways to explore the Santorini volcano is by joining a sea cruise or excursion that may even include a stop at Palia Kameni and Nea Kameni and the sulfur-rich Hot Springs. From there, you can walk all the way up to the crater and walk around the caldera rim. In this case, just make sure you wear some comfy, steady hiking shoes. Although no challenging hiking is expected, it’s best to feel comfortable during such an exciting experience.

Other things to do in Santorini after pampering yourself with unsurpassed views of the glistering Mediterranean Sea and laying eyes on the remarkable Santorini volcano could be to:

Of course, the perfect closure of such a thrilling day could be with a glass of the finest local wine at hand while soaking up the last rays of the sun from your private Kivotos Santorini balcony overlooking the sea. Feel free to let yourself take in all the profound beauty that surrounds you as the cloudless sky slips into its starry dress, offering unforgettable sights and moments to be shared with your loved one(s).